Summer Sale Happening Now! Use code SUMMER30 for 30% off your entire purchase!

Now reading: Why It's So Hard To Stop Women From Sleeping In A Menstrual Shed.
Share
PrevNext
May 13, 20195:27 PM ET
Heard on All Things Considered 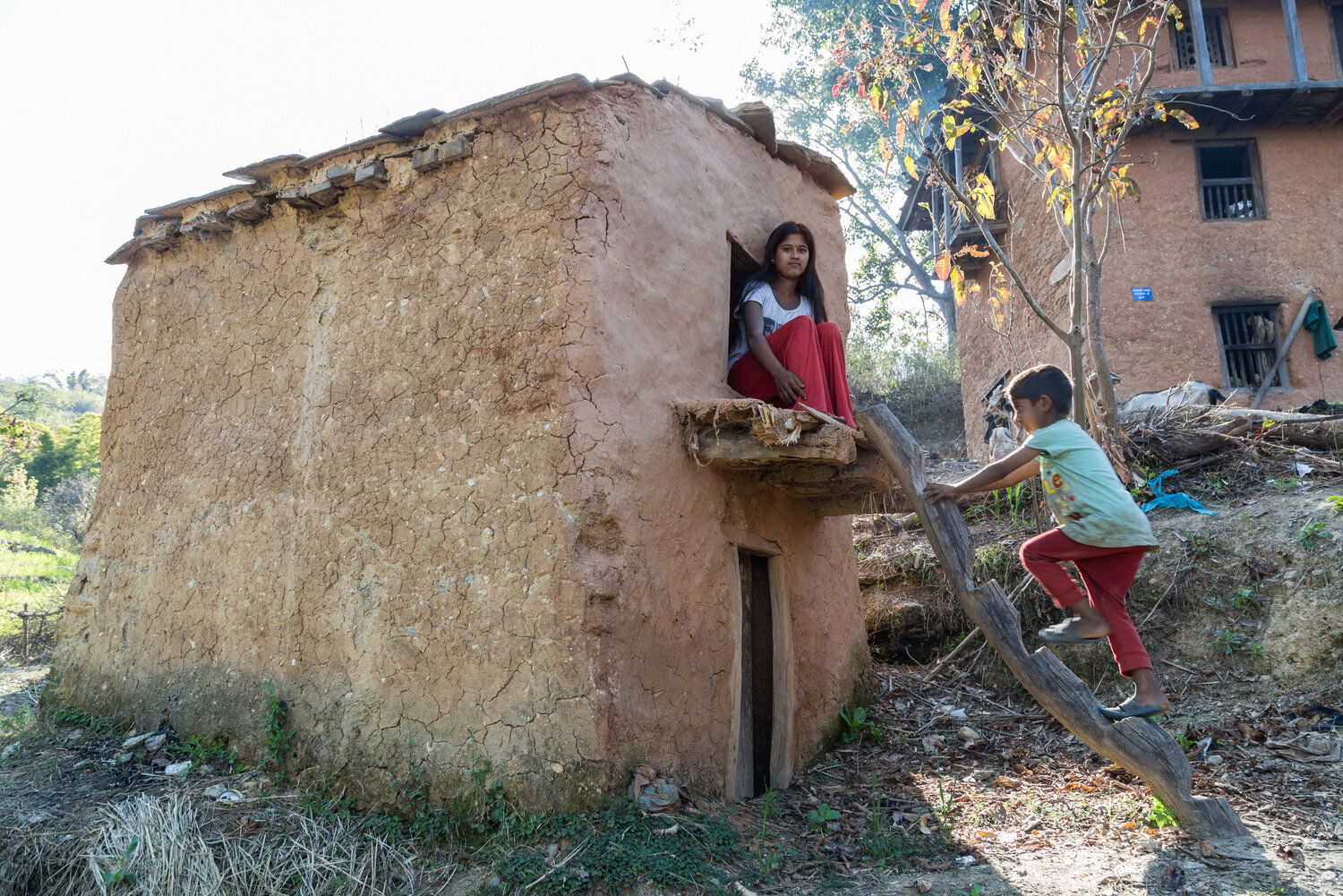 Manisha Jaisi, 16, poses at the shed outside her house where she sleeps when she has her period. Jaisi got her period two months after her neighbor, Dambara Upadhyay, died of unknown causes while sleeping in a similar shed in 2016. Jaisi says she never goes without her phone in the shed because she's scared after Upadhyay's death.

Every year in Nepal, women die while sleeping in a shed outside their home because they are on their period. The cause of death is often smoke inhalation from lighting a fire to stay warm.

The practice, called chaupadi, is linked to Hindu beliefs around religious purity and the idea that menstruation is spiritually polluting. In much of the country, this means that a woman who is menstruating will avoid temples, prayer rooms and kitchens — places important to keep pure in the Hindu religion.

In parts of the remote west, an extreme version means nights sleeping outside in a hut or shed.

Last August, the government of Nepal announced punishments for anyone who forcesa female family member to sleep outside while on her period: three months in jail or a fine of 3,000 rupees, roughly $30. 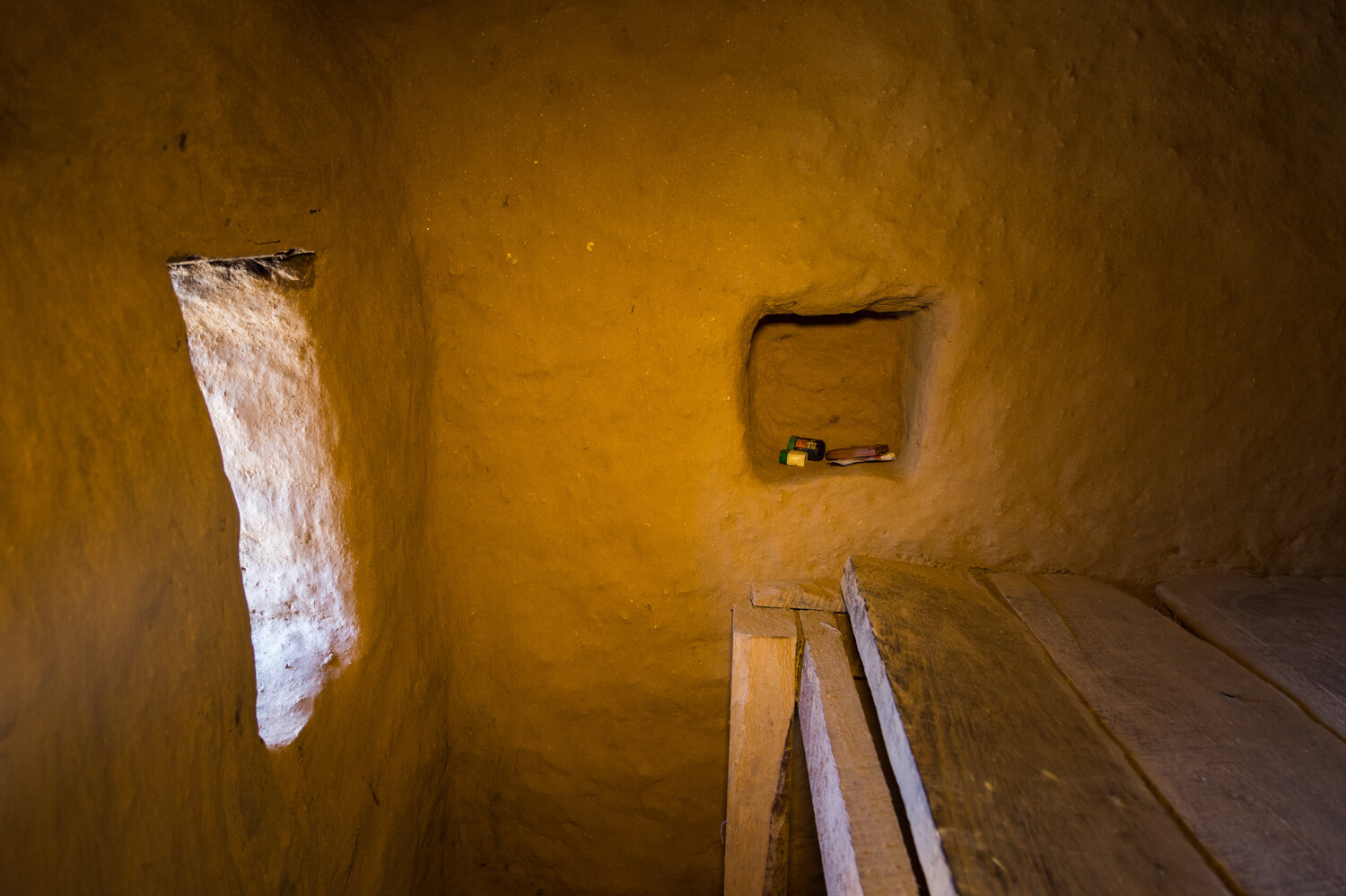 Toiletries sit in the niche of a shed where women from the Upadhyay family sleep while menstruating: Vicks VapoRub for Nirmala Upadhyay's headaches and a cracked mirror and face cream that belong to her 14-year-old niece. In 2016, family member Dambara Upadhyay died while sleeping in a shed that the family subsequently tore down — and then replaced.

The practice was previously banned by Nepal's Supreme Court in 2005 but without penalties attached.

So far, the legislation is off to a slow start.

Consider the case of Dambara Upadhyay.

Three years ago, Upadhyay, age 21, died inside a menstrual shed in the village of Timalsena. Family members say her husband had asked her to stay in the family home that night, but she had said she was afraid that if she broke the rules, harm could come to her family. 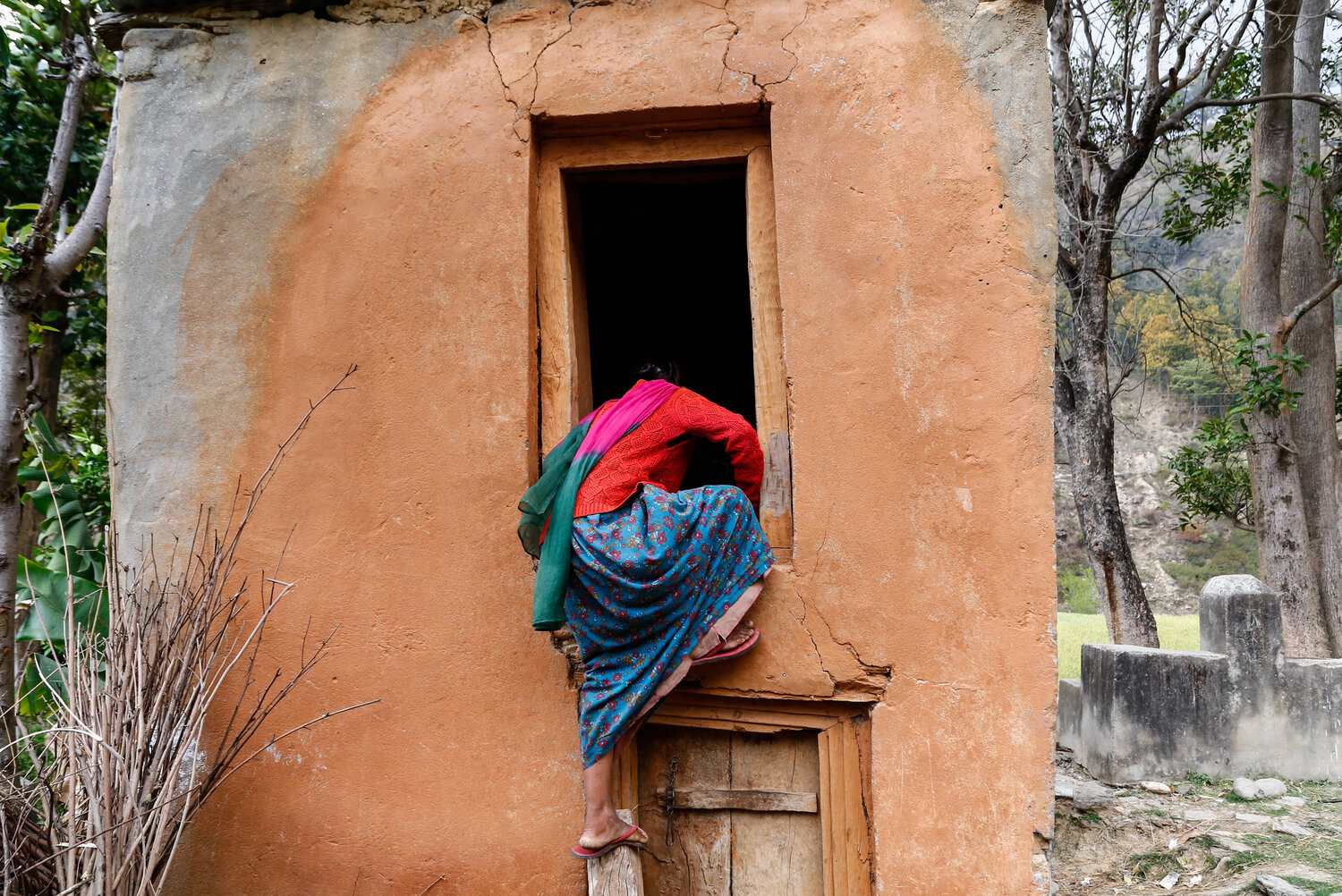 Mina Rana sleeps in this shed when she is on her period. According to her community's interpretation of the practice called chaupadi, she is forbidden to stay inside the house.

The next morning, her sister-in-law, Nirmala Upadhyay, now 40, found her body in the shed. 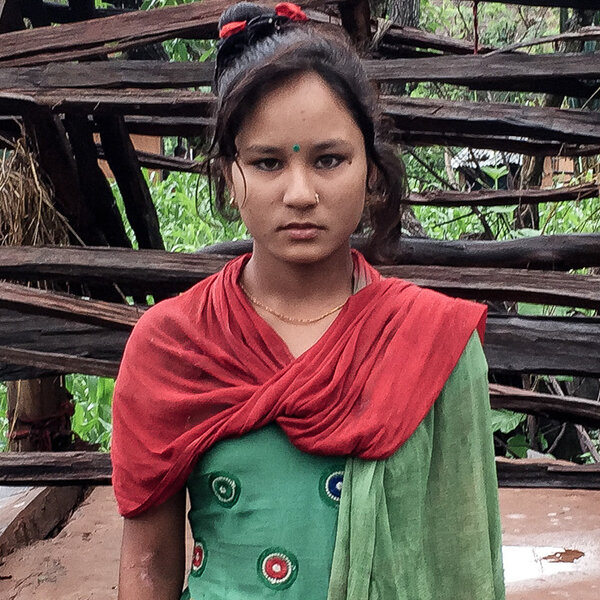 A Girl Gets Her Period And Is Banished To The Shed: #15Girls

The cause of death remains unknown. The family quickly tore down the shed, fearing that her spirit would haunt them — but perhaps also because local officials sometimes tear down the sheds in an attempt to enforce the law.

For a while, the women of the family slept inside the house while menstruating, though in a separate room that they would later have to purify.

But six months ago, the family built a new shed. Now, the women usually sleep there, including Upadhyay's 14-year-old niece, who recently got her first period.

The family's return to the shed is a sign of how hard it is to stop the practice.

The August law had been enacted after a series of highly publicized deaths, including Upadhyay's in November 2016. Just a month later, in December 2016, a 15-year-old died of suffocation after lighting a fire inside the shed. Seven months after that, in July 2017, another teen died of a snakebite. Deaths of other women and girls followed.

Four people have died in sheds since the start of 2019, including two children sleeping beside their mother — all three reportedly died from smoke inhalation after lighting a fire inside the confined space of the shed. But no one has been prosecuted since the new law was announced. 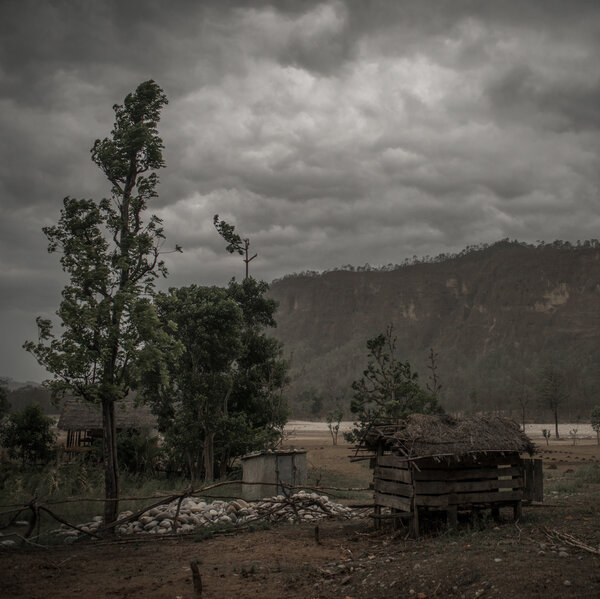 Banished To A 'Menstrual Shed,' A Teen In Nepal Is Bitten By A Snake And Dies

Mohna Ansari, a member of Nepal's National Human Rights Commission in Kathmandu, says myriad reasons prevent the law from having much effect. For one, a woman who reports a family member might be kicked out of the family with no way to support herself on her own. It's also tricky to prove someone was forced to sleep in a menstrual shed when many women do so out of societal pressure and their own fear of the consequences.

"It's a deep-rooted belief if they will not go [to the shed], something [bad] will happen," Ansari says. Family members could get sick, livestock could die, crops could fail.

Janak Bahadur Shahi is the deputy superintendent of police in Achham district, where many of the deaths have occurred and where Upadhyay lived. He agrees that fear of spiritual retribution trumps the law.

"They [are] afraid with the God, not with the police," he says.

Next door to the Upadhyay home, Koshila Khatri, 27, talks about a time when the dishes she ate from while menstruating were accidentally brought into the house. Then a tiger killed two of the family's goats. Khatri isn't totally sure whether to blame this attack on menstruation.

Khatri's father-in-law, Dilli Prasad Jaisi, who heads the household, says the mishap with the goats is an example of why laws prohibiting the practice won't work. "One buffalo costs 20,000 rupees [about $180]. If it dies because a menstruating woman touched it, is the government going to pay for that?" Jaisi asks.

Even when women don't actually sleep outside, menstrual restrictions take a psychological toll, says Subeksha Poudel, senior manager for communications and gender and social inclusion at Possible Health, a health care organization that focuses on maternal health in the region.

"If you're labeling and treating girls as impure, it's the same as treating [them] as untouchable," Poudel says, comparing it to the caste system. In fact, colloquially, Nepalis use the phrase that means "to become untouchable" for a woman who is menstruating.

Religion and health care are intertwined too. People believe that illnesses may have a spiritual cause, and a shaman may be the first person called when someone falls sick. Drawing upon Hindu traditions, a shaman may say the illness is the result of breaking menstruation rules and angering God.

The belief is that, because most homes have a prayer room, God inhabits the home. So even if menstruating women don't touch religious items, their very presence in the home could be considered enough to contaminate them.

God inside — and outside — the house

In a village a few hours away from Timalsena, the local government is teaming up with shamans to find a workaround: keep God outside the house so women can stay in. The campaign's slogan translates to "God outside, menstruating women inside."

With the endorsement of the shamans, the municipal government is constructing outdoor community temples where families can store items they use for prayer, like sacred cloths and bells typically kept in prayer rooms inside their houses. With no symbolic representation of God inside the home, the government hopes that women can sleep inside while they're menstruating and families will not be afraid.

"We still need to pray, but for our safety, now we put God outside," says Ratna Tamata, a 55-year-old woman from Ramaroshan, standing at one of the temples under construction.

The Ramaroshan municipal government is trying a few tactics to end the practice of menstrual isolation. Vice chairperson Saraswati Rawal says they'll refuse to issue birth certificates, for example, for children in families that practice chaupadi.

Krishna Bhakta Pokhrel is a parliamentarian involved with drafting the anti-chaupadi measure that went into effect in August. Pokhrel told NPR that several municipalities are considering the withholding of government services processed at the municipal level, like citizenship documentation and social security registration.

Of course, families can simply lie about whether they practice chaupadi.

The campaign with the shamans has inspired a group of women activists in Ramaroshan to push back.

"Men and women are equal. Their blood is the same. They can live happily together," the women sang at a demonstration when NPR visited their village in March. Clad in a bright blue and pink sari like the rest of the group, their leader, Ganga Devi Saud, says that women can show how nothing bad will happen if they abandon the practice.

At the Nepal Fertility Care Center in Kathmandu, executive director Pema Lhaki wants to help more women and girls decide whether to stop.

Lhaki co-authored a study published in February in the journal Global Public Health.It found that only around a quarter of nearly 700 women and girls surveyed in Nepal knew menstruation was "to prepare for pregnancy." More than half thought it was to release impure blood.

The center has teamed up with other organizations and the government of Nepal to improve reproductive education in schools so students understand that menstruation is a normal biological process — not a curse or form of spiritual pollution.

In the village of Masthamandu, women of a younger generation have come up with their own way to stay safe without disrupting the social order. Aishwarya Kunwar, 24, is finishing up a prenatal session with a health care worker. At nine months pregnant, she doesn't have to worry about periods right now, but she and other women have pretended that they'd received hormonal birth control injections and told their in-laws that as a result, they would not menstruate.

Kunwar says their husbands know about and support their deception.

Back in Timalsena, Nirmala Upadhyay, the sister-in-law of the late Dambara Upadhyay, is waiting for generational change. For now, she still has to follow the rules of the house where she lives with her in-laws.

Things will be different, she says, when she's in charge. "When my mother-in-law and father-in-law are no longer with us, we'll do everything. We'll stay inside, milk the buffalo, cook food. We just won't go to the temple. Everything else we'll do."

Danielle Preiss is a freelance print and radio journalist based in South Asia. She tweets at @daniellepreiss.

Want To Make a Difference… With Your Period?

Periods! Why These 8th-Graders Aren't Afraid To Talk About Them.